Not long after our blog discussing detecting Log2Shell activity in your network with a content pack, Industroyer2 reared its ugly head. Nozomi Networks Labs dug deeply into the topic of Industroyer2 through various blogs sharing technical details of the exploit and an in-depth White Paper providing insight into the evolution of Industroyer2 and the campaign behind its spread. As part of their Industroyer2 research efforts, Nozomi Networks’ security research and product development teams put together a content pack to help our customers look for activity related to Industroyer2 in their network. While there have been no reports of Industroyer2 out in the wild, it’s not a stretch of the imagination to expect some variant of this exploit in circulation soon.

As a quick refresher for those not familiar, a content pack is a way of exporting a combination of queries and reports into a single JSON file that can be exported into a completely separate environment. At their core, content packs are just instructions for executing queries and reports, so they do not contain any proprietary information and are safe to share. This allows for Nozomi Networks customers to quickly share custom reports or queries internally or to the Nozomi Networks user community. Content packs can be used to share things like best practices between organizations in similar industries or, in this instance, sharing detection strategies for new threats.

After downloading (and extracting the .json file) the content pack from Nozomi Networks, go to the “Administration” page in Guardian and select “Import.”

Figure 1. Selecting Import for a new content pack in Guardian.

Then just drag and drop the .json file into the appropriate box at the bottom of the page.

Once the content pack has been imported, you will see a report folder and query group containing the newly imported content. Navigating to Analysis > Queries > Saved queries page will now show a “Content Pack Industroyer2” query group.

Selecting the “Content Pack Industroyer2” group from the dropdown will bring you to a page with all of the new queries.

The queries should be executed automatically when you open the group.  If not, click on “Edit” and then select “Automatically execute queries on load” to enable this.

Hopefully you will find some of the queries returning with no results, meaning you don’t have an infestation of Industroyer2 running rampant through your network. However, it is important to remember that the Industroyer2 malware is a single piece in a larger attack against an industrial environment, so there are several things to watch for when threat hunting.

Aside from looking for signatures matching Industroyer2 specific alerts, we need to expand our search to cover traffic patterns that may be either an indicator of an Industroyer2 copycat or a precursor to an infestation. Let’s walk through each of the queries in this content pack:

Tying it all Together

In the content pack alongside the queries, you will find an executive report that can be run on a schedule or on demand. This report provides a read out of your environment in a format that can be distributed via email or other means to those who do not have direct access to the Guardian interface. The report goes into detail on each of the detections and provides background information to help the reader better understand the information.

Content packs are a relatively new addition to the tools Nozomi Networks provides our customers to stay informed and protected against new threats. Even better, they were created with sharing in mind, to allow for our global community of customers and partners to better collaborate on defending what is important to their business. 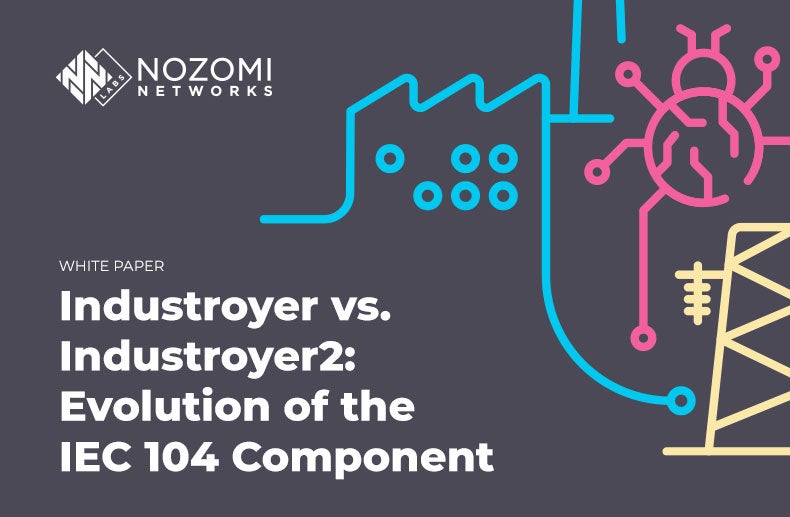 Industroyer vs. Industroyer2: Evolution of the IEC 104 Component

Bruce Snell comes to Nozomi Networks with 25 years in the information security industry. His background includes administration, deployment, and consulting on all aspects of traditional IT security.  For the past 10 years, Bruce has branched out into OT/IoT cybersecurity (with GICSP certification), working on projects including automotive pen-testing, oil and gas pipelines, autonomous vehicle data, medical IoT, smart cities, and others. Bruce has also been a regular speaker at cybersecurity and IoT conferences as well as a guest lecturer at Wharton and Harvard Business School.